LAS VEGAS, Jan. 4, 2017 — This week at CES® 2017 in Las Vegas, LG Electronics (LG) will showcase a groundbreaking new lineup of intelligent robots, as part of the company’s innovations in artificial intelligence and developments in the IoT ecosystem. The lineup includes a home robot that doubles as a smart home gateway and intelligent home notification center, enhancing convenience in users’ day-to-day lives. LG is also taking the power of IoT and smart technology outside of the home with advanced robots designed for use in airports and other public spaces. 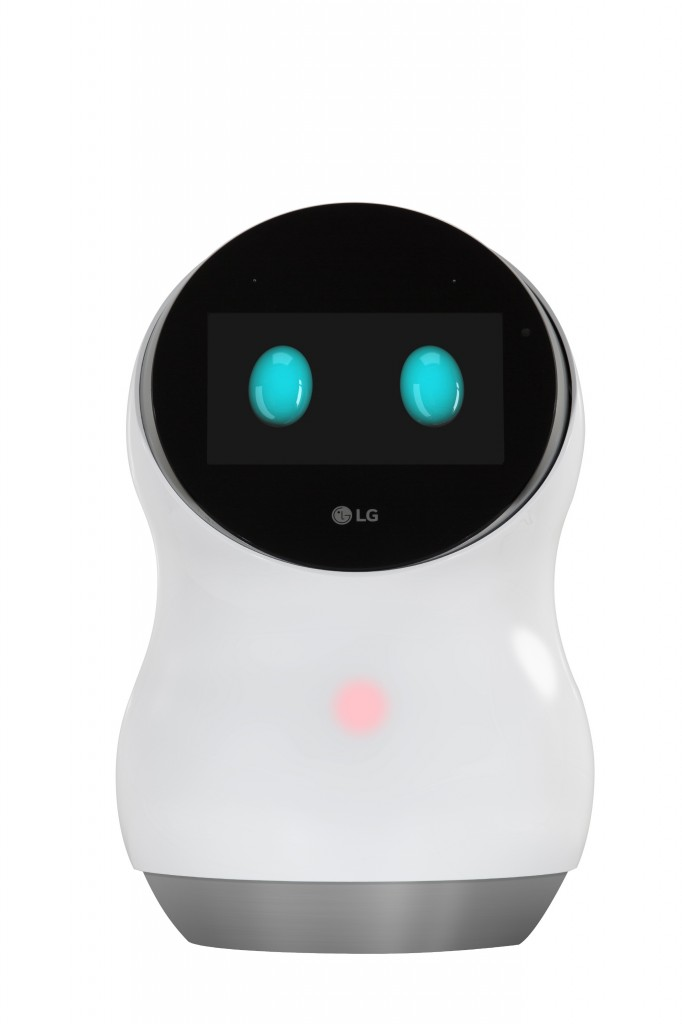 LG’s eye-catching Hub Robot takes the concept of the smart home to the next level. By connecting to other smart appliances in the home, the Hub Robot uses Amazon Alexa’s voice recognition technology to complete household tasks such as turning on the air conditioner or changing a dryer cycle with simple verbal commands. The Hub Robot is equipped with an interactive display that can showcase a wide variety of information such as images of contents inside of the refrigerator and recipes, complete with step-by-step audio instructions. Additionally, the Hub Robot offers everyday consumer conveniences such as the ability to play music, set alarms, create reminder memos and provide weather and traffic updates.

With its friendly, anthropomorphic design, LG’s Hub Robot can interact with the entire family in a variety of different ways. It can move and swivel in place, as well as express a wide range of emotions by displaying a face on its display. The Hub Robot is designed to respond to consumers using body language, such as nodding its head when answering simple questions, and is always aware of activities inside the home, such as when family members leave, come home and go to bed. And because the Hub Robot is able to distinguish different family members’ faces with its camera, it can be programmed with a different greeting for each family member.

The Hub Robot works best when placed in common areas of the house where family members tend to gather, such as the kitchen or the living room. To complement the Hub Robot, LG will also introduce mini robots that can be placed in other rooms in the house. Also equipped with a sleek visual display, these mini robots are extensions of the Hub Robot and can perform many of the same functions.

LG’s expansion of its intelligent services ecosystem reaches far beyond just the home. The Airport Guide Robot – soon to be seen in Seoul’s Incheon International Airport – is an intelligent information assistant for travelers, answering questions in four languages: English, Chinese, Japanese and Korean. With a simple scan of a passenger’s ticket, the robot can provide detailed information about a flight’s boarding time and gate location, and even the weather of a traveler’s destination city. The airport robot offers directions to destinations inside the airport, along with estimated distances and walking times, and can even escort lost or late travelers to their gates, or any other airport location.

As one of the industry’s early innovators of robotic vacuum cleaners, LG’s lineup would not be complete without an industrial-sized robot vacuum. LG’s Airport Cleaning Robot is a super-sized robot vacuum equipped with a large-capacity dust canister as well as multiple brushes and motors. Capable of cleaning everything from tiles to carpet floors, this robot is equipped with the latest in smart sensors and multiple cameras to ensure a safe, effective and powerful performance in even the most crowded airports. Multiple sensors using light detection and ranging (LIDAR) as well as sensitive bumpers which detect obstacles are employed throughout. Thanks to the use of simultaneous localization and mapping (SLAM) technology, the robot is always aware of its location.

LG’s Lawn Mowing Robot rounds out the company’s lineup of advanced robots at CES 2017. Ideal for many types of yards, this robot benefits from years of development of the HOM-BOT vacuum cleaner to trim grass accurately, reliably and most of all, safely. Equipped with many of the advanced sensors and bumpers found in the airport robot, the Lawn Mowing Robot recognizes its own location at every moment, as well as the location of every obstacle in sight, such as trees or hedges. Designed to maximize cutting performance, this robot employs a fast-moving blade that leaves lawns looking impeccable. In addition to its features, the side wire simplifies the ordinarily-complicated installation process without the need to calculate offsets, making it easily accessible and user-friendly.

“LG has been involved in smart technology and robotics for many years with the HOM-BOT robot vacuum cleaner being our most visible consumer effort,” said Song Dae-hyun, president of LG Electronics and Home Appliance & Air Solutions Company. “Here at CES, we’re demonstrating how we’re taking the knowledge gleaned from years of research and applying that to various situations inside and outside the home.”

LG’s new robot collection will be on display at LG’s CES booth (Central Hall #11100) in the Las Vegas Convention Center from Jan. 5-8.