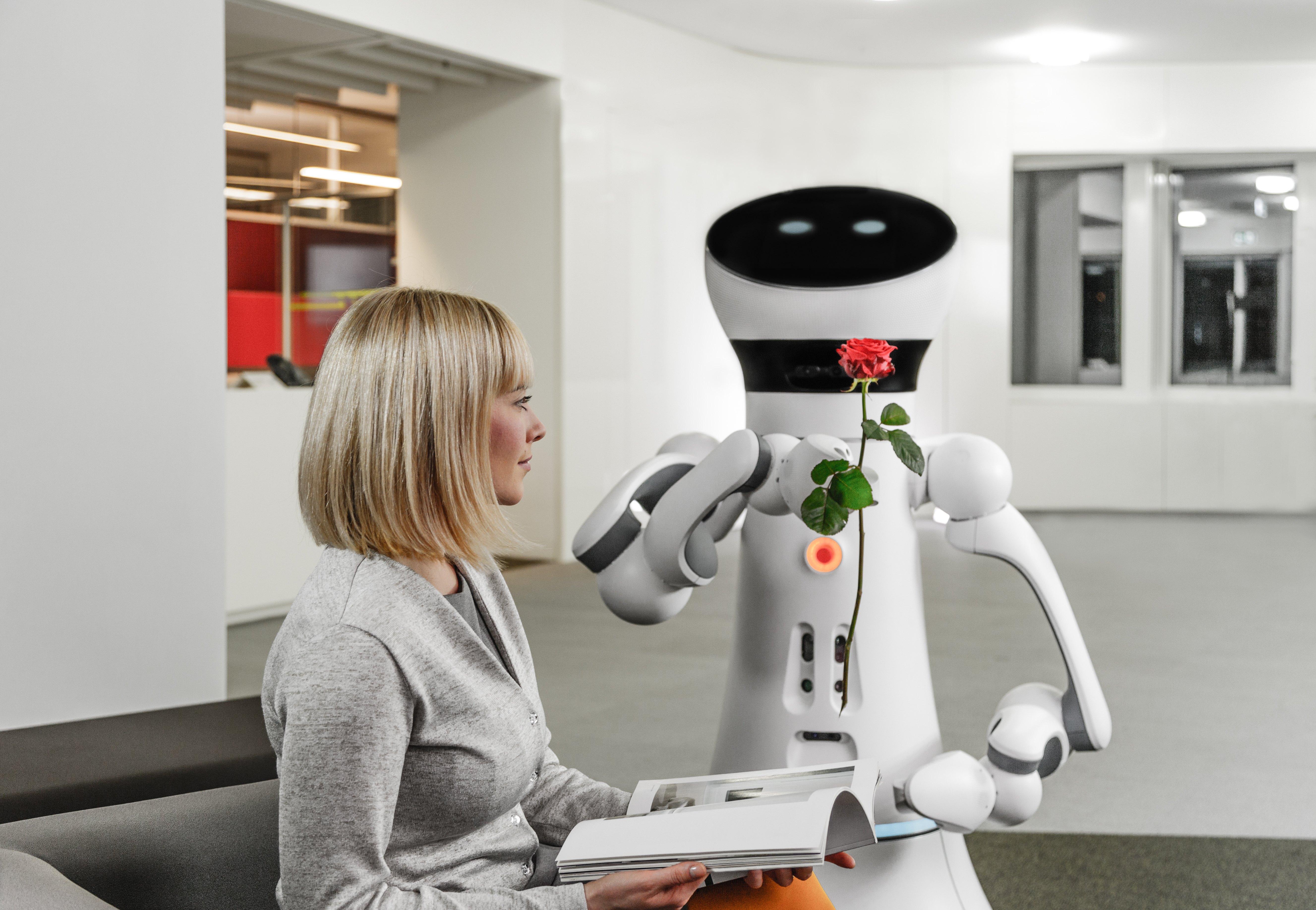 Following the success of the personal computer (PC), our private and professional lives could soon be improved by personal robots (PR). These would function as  a sort of “electronic butler”, bringing the newspaper, pouring coffee or clearing  the table. They are friendly and affable, yet remain discreetly in the background  when not needed. The Fraunhofer Institute for Manufacturing Engineering and Automation IPA has been developing innovative service robots since the 1990s.  These can be used in areas including households, hotels, care homes and hospitals,  for example. Researchers have now developed a new model centred on the concept of a universal helper for everyday scenarios: the fourth generation of  the “Care-O-Bot®”. While its predecessors from 1998 onwards were used primarily in the development of technological fundamentals, the Care-O-bot® 4 is a modular product family providing the basis for commercial service robot solutions.

Together with the Stuttgart-based design studio Phoenix Design and Schunk, Fraunhofer IPA has been working on the completion of its new service robots for three years. The  result is unique. “The fourth generation of the Care-O-bot® is not only more agile, modular  and charming than its predecessors, but it also stands out through the use of costreducing construction principles,” explains Dr Ulrich Reiser, Project and Group Leader at Fraunhofer IPA. In this way, large parts of its internal construction feature folding sheet metal, which is economical to produce in small quantities.

Andreas Haug, co-Founder and Managing Director of Phoenix Design, adds: “Care-Obot® 4 is a successful symbiosis of design and engineering, as well as functionality and emotion, which quickly encourages user interaction.” Its streamlined design, with two arms attached at the side and a type of head, mean that the robot is reminiscent of a  human being. However, developers did not want its appearance to be over-human, as  this would “encourage false expectations with regard to its capabilities” for users, says  Ulrich Reiser. It is just the robot’s “internal values” which are human: it always maintains  a respectful distance, shows what it has understood and what it intends to do, while also being able to make simple gestures and reflect emotions. As with previous generations, social role models were used as a guiding vision in developing the design and functionality. While the concept for the Care-O-bot® 3 was a more reserved, cautious butler, its successor is as courteous, friendly and affable as a gentleman.

The Care-O-bot® 4 also features a greater range of movements in comparison with previous generations. The smart helper is fitted with patented spherical joints around discreet pivot points on its neck and hips. These allow the robot to bend forward without losing its balance. Developers took inspiration from human anatomy, creating a moving part which shifts backwards when the robot bends over, ensuring that balance is maintained. The Care-O-bot® 4 does therefore not fall over when carrying a load in outstretched arms.

An innovative one-finger hand was developed with Schunk especially for the Care-Obot® 4. The combination of simplicity and elegance with integrated sensors is impressive. Schunk also manufacture their own standardised Schunk Powerball ERB modules, which  are used as arm joints. Their compact ball shape permits seamless integration. Managing  Partner Henrik A. Schunk comments: “The Care-O-bot® 4 represents a significant milestone in the mobile service robot industry on account of its high degree of standardisation.”

In comparison with its predecessors, the fields of application are far more wide-ranging for the Care-O-bot® 4. Its modular construction allows various different configurations. Arms, spherical joints and sensors are optional. If the intended purpose if to serve drinks, one  hand can be replaced by a tray, or the mobile base platform can be used on its own  as a serving trolley. Targeted adaptation for specific tasks significantly reduces costs. Individual robot platforms can be configured for a wide range of applications: a mobile information centre in museums, DIY stores and airports, for collection and delivery services in homes and offices, for security applications or as museum robots at attractions – the Care-O-bot® 4 is a safe and handy human helper at all times.

Facial expressions and gestures for a user-friendly service

IPA developers were determined to ensure that the Care-O-bot® 4 is simple to use. Users are more open to the help a robot can offer when they know that it functions properly. With this in mind, the Care-O-bot® 4 is fitted with an easily accessible touchscreen on the head. Moreover, it possesses a microphone for speech recognition and cameras for personal and gesture recognition. The Care-O-bot® 4’s spherical joints allow it to intuitively inform users what it is planning to do and what it has understood, including gestures such as nodding and shaking the head. A circle of LEDs on its torso area and a laser pointer in the hand serve as information exchange points.

Care-O-bot® 4 offers open software interfaces that makes it easily expandable for deve- lopers. Ulrich Reiser is keen for as many scientists as possible to use the system developed in Stuttgart in order to steadily advance its possible areas of application. “The objective is to steadily grow the developer community that was established already around CareO-bot® 3,” he explains. Numerous developers at research institutions and universities around the world have already worked with the Care-O-bot® 3 and the new Care-Obot® 4 should follow suit.

The Fraunhofer Institute for Manufacturing Engineering and Automation IPA was founded in 1959. It is one of the largest single institutes within this research organization and employs around 435 scientists. It has an annual budget of approximately 58,4 million euros, of which 22.9 million euros derive from industrial projects. The Fraunhofer IPA is made up of 14 individual departments engaged in the fields of Production Organization, Surface Engineering, Automation, and Process Technology. Its research and development work focuses on organizational and technological issues in the manufacturing environment of advanced industries, including Automotive, Mechanical Engineering, Electronics and Microsystems Engineering, Energy, and Medical and Biological Engineering. The R&D projects aim to enhance production processes and make products more cost-effective and environmentally friendly by identifying and exploiting the potential for automation and streamlining at our customers’ companies. This helps to maintain jobs and to strengthen international competitiveness.

Jimmy Tran presented his works on “Canine Assisted Robot Deployment for Urban Search and Rescue“. The basic idea is as simple as brilliant, use a equipped dog to find victims and to inform operators about him. So, dogs are well used in rescue and they have a high mobility. They can easily overcome huge rubles and are able to carry video cameras or rescue material. So, his approach is to use the dogs to deploy a small robot next to a victim, which would allow to investigate medical status of the person. The idea is hilarious.

“Development of leg-track hybrid locomotion to traverse loose slopes and irregular terrain” is so far the most interesting technical approach of this workshop. It shows a way how a tracked like vehicle can be combined with a semi-Walker.

The invited speaker Bernardo Wagner showed the outcomes of his department. The Leibniz University of Hannover has worked intensively in the field of “Perception and Navigation with 3D Laser Range Data in Challenging Environments“.

“Potential Field based Approach for Coordinate Exploration with a Multi-Robot Team” is topic of Alessandro Renzaglia.

Bin Li showed another nice approach of a shape shifting robot. His robot is able to shape shift it self by rearranging its three motion segments. “Cooperative Reconfiguration between Two Specific Configurations for A Shape-shifting Robot”

Jorge Bruno Silva presented a approach of trajectory planing while respecting time constrains in “Generating Trajectories With Temporal Constraints for an Autonomous Robot”
Noritaka Sato closed the day by presenting novel a HMI approach for teleoperation. Instead of showing only the direct camera image his group uses temporal shifted images to generate an artificial bird eye view, like it is given in computer car games. “Teleoperation System Using Past Image Records Considering Moving Objects”

Not eXactly C is a high-level programming language for the Lego Mindstorms NXT. NXC, which is short for Not eXactly C, is based on Next Byte Codes, an assembly language. NXC has a syntax like C.

There is a new version of the NXC Tutorial available at the Roberta Homepage. It is an extended german version of the tutorial original based on the work of Daniele Benedettelli.

You can download the german tutorial for free here: http://roberta-home.de/de/was-bietet-roberta/roberta-reihe/nxc-tutorial

All registered Roberta-Teachers are now able to download the CAD-File of “Jeffrey” at the Roberta-Homepage. 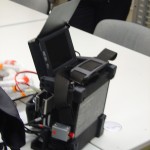 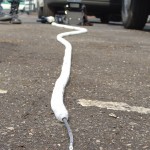