In 2014 UFACTORY built the first open source desktop robotic arm, ushering in a new era of affordable desktop robotic arms for consumers. uArm is an Arduino-powered desktop 4-axis parallel-mechanism robot, easy to use, has multiple accessories and open sourced. In Jan 2014, uArm went on Kickstarter and became famous overnight, leading to an exclusive interview with WIRED. A standout quote from the piece: “Thirty years ago Bill Gates promised to put a computer on every desk in America, an ambitious sentiment echoed by Wang and company … The most innovative aspect of the entire project is probably the concept of putting a robot arm on your desk”.

As the robot arm is moving to various industries, its users have expanded from relatively minority geeks to robot lovers. The demand for better and easier user experience is increasing.

January 23, 2017, UFACTORY returns again, announcing two robotic arms in uArm Swift Series. Swift is intended to highlight the elegant texture of the fuselage, lightweight and portable form and flexible movement, just like a swift. This series has uArm Swift and uArm Swift Pro. 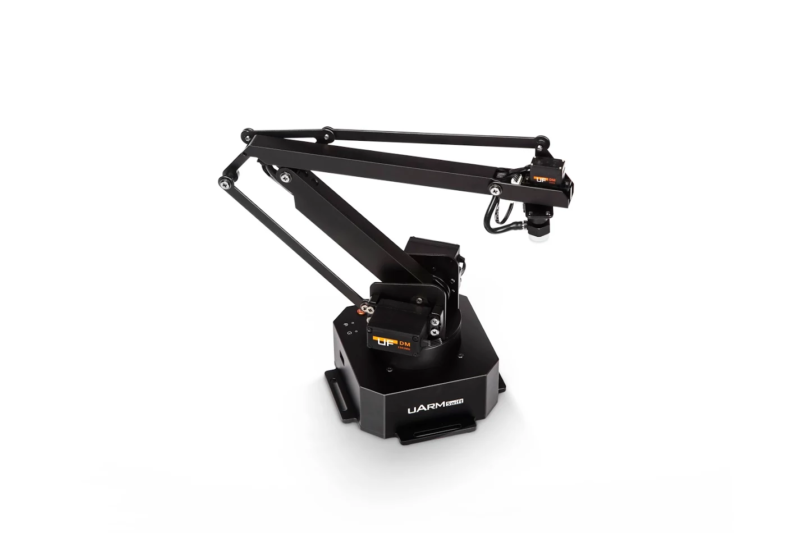 uArm Swift enhanced the control algorithm and increased the accuracy by 50%, from 1cm to 5mm.

uArm Swift Series upgrades the main board. We choose Arduino MEGA 2560, which is nearly 10 times larger in the storage space compared to the previous UNO edition.

uArm Swift Series has 4-axis, whether equipped with fixtures or suction head, the end of uArm can freely steer, and the replacement of accessories requires less than 30 seconds.

uArm Swift Series can be equipped with a smart car, the uCar. uCar is a mobile open-source car, with infrared avoidance, trajectory planning functions.

Teach uArm Swift by your own hand to learn move, gripping, dropping, and save them with just a click to replay on Blockly mode. uArm Swift can also sync offline learning data once connected.

Blockly is a web-based visual programming tool, allowing users to program without needing to code The software is designed to be so simple that even even preschool children could create a program easily. Detailed tutorial will be provided for your quick guide and interesting secondary development. 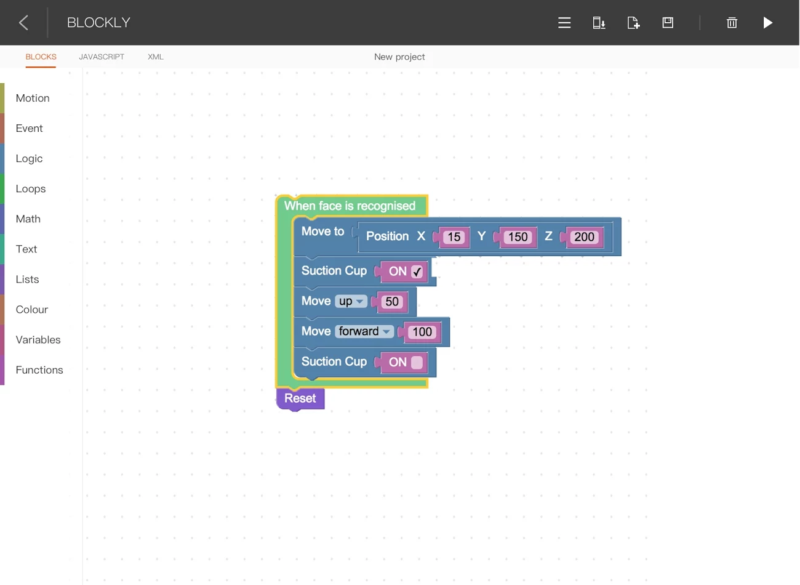 uArm Studio has combined control of keyboard and mouse. Developers may use keyboard hotkeys and mouse simultaneously to control move, gripping, and dropping of the robotic arm, and it supports customize hot keys.

After connect with LeapMotion, users of uArm Swift may use their own hand to control gesture such as move, gripping and dropping etc. 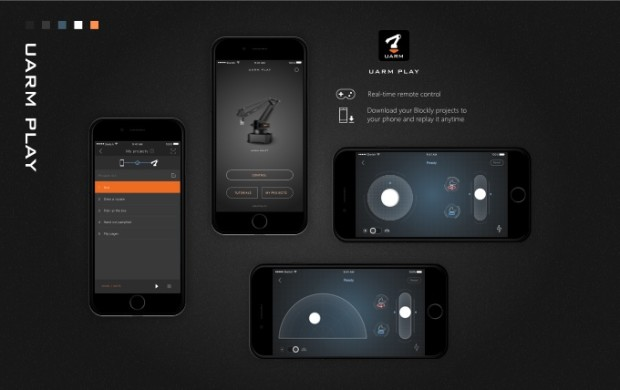 Your smartphone can also work as an external actuator, download and run a program from Blockly.

UCS, also known as uArm Creator Studio, which is a open sourced developer tool developed by UFACTORY. UCS has integrated graphical programming and coding, to achieve features such as rapid development, visualize and easy sharing.

For programming developers, UCS is a rapid development tool, developers doesn’t need to construct programming environment, any interface of the whole system supports Python script, all variables can be sharing between visual programming and coding which means you don’t need to copy setting each time.

UCS has integrated complex robotic vision function, just need to connect with the camera, so the uArm can “see” and adapt to different environment.

Every creator will be able to save their own work as .task file format through the UCS programming, and it supports one click sharing to the official website of UFACTORY or Reddit Community, copying scenario in just one click on other robotic arms.

The uArm Swift Pro is a “Open Sourced” design concept with more freedom, simplicity, and functions. This is a whole new open platform came from developers, back to developers, and still that Open Source Robotic Arm. We just can’t wait to become  your comprehensive desktop assistant!