Some weeks ago, I received the Meccanoid XL 2.0 as a review copy. Unfortunately, it was only a few weeks later that I found time to commit myself more closely with this new humanoid robot from Meccano. Even though I got the Meccanoid free of charge, this is a neutral report. Here are my first impressions after the assembly and the first hours of the „programming“. 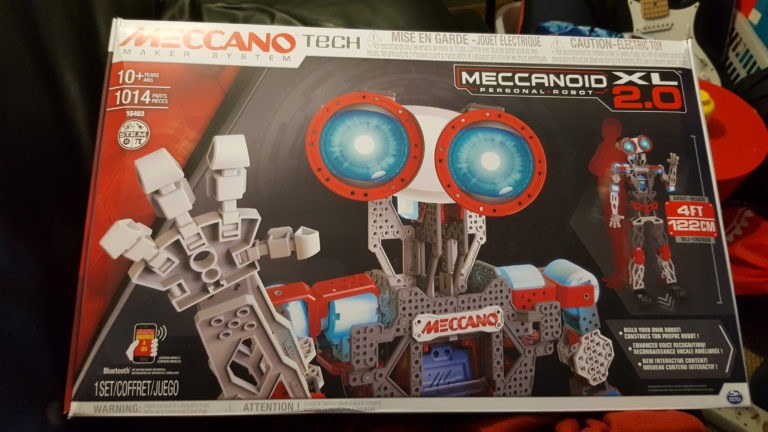 The Meccanoid XL 2.0 is the successor of Meccanoid G15KS and its smaller G15 version. Even the G15 has received a successor with the Meccanoid 2.0 (excluding XL). The number of parts has been reduced slightly compared to its predecessor, and the previously existing building instructions for a dinosaur are missing on the robot now. There’s a new „Meccasaur“ Dino robot now as a separate product. Also accounted for, is the ability to control the robot through a Smartphone by controlling the movements in front of the camera. This option was apparently completely removed from the app and is also no longer available for the G15 or G15KS. Newly added are over 3000 new gestures and language editions, as well as possibilities of speech recognition. The understood vocabulary of the robot was so significantly expanded compared to the previous version. The Meccanoid XL 2.0 has a size of 1,20 m, what makes him to be really impressive, and an absolute eye-catcher. 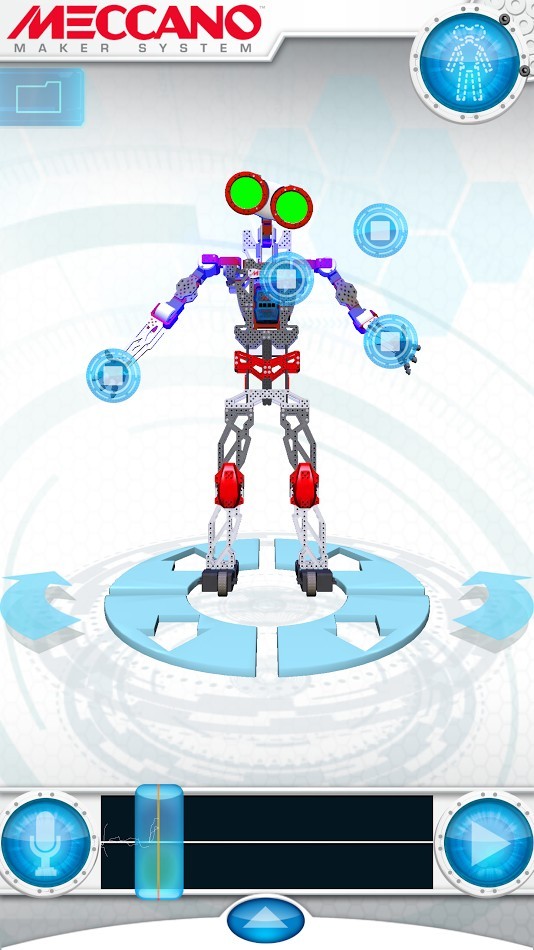 The Assembly was largely problem-free; however I must confess at this point that I am a newbie in Meccano. The instructions could have been given in better quality, so it was difficult to identify building steps and the corresponding correct holes for the screws in some places. You should take special consideration on the cable guide, because this is neglected in the building instructions’ manual. Here planning and thinking is required, whereby the degree of difficulty is rather aimed at advanced hobbyists. Even the assembly time of 5-6 hours proves to me that this is not a robot Kit for beginners. The specified minimum age of 10 years here, in my opinion, is somewhat young. Certainly, children need assistance by an adult when reassembling.

The parts are different from what Meccano usually offers, not made of metal but of plastic. Meccano has already received criticism online for the plastic parts, but they did not disturb me. The motors of the robot parts made of iron would be more overworked than with new plastic model. 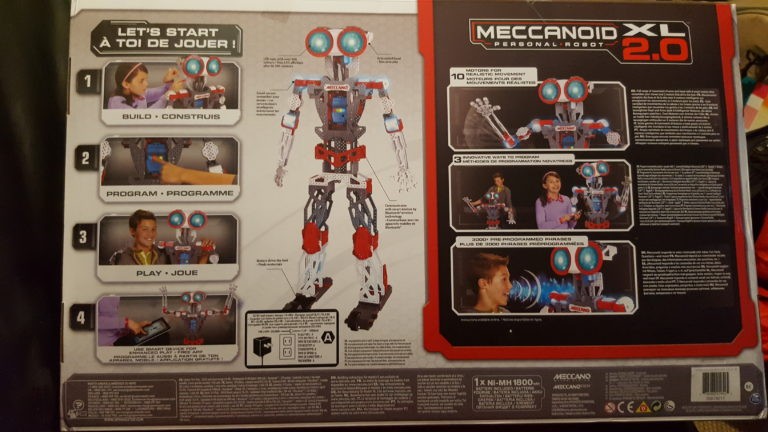 Unfortunately many of the components are very specialized, creating one’s customized building is complicated. The hope here is that a few days ago on the Meccano Facebook page, there was posted a video, belonging to a new „Meccano mega builds“ series. This series presented alternate building possibilities in combination with other Meccano sets. Also present is a video for a new „Mecca spider“, a robot spider based on the Meccanoid and the 25 in 1 4 x 4 off-roader set. Unfortunately, I have promised instructions in the video not yet on the Meccano site, but I have already informed the support team. Please more of such alternative models are for the meccanoid set!

The Meccanoid can be adjusted to different types of „Programming“. Movement can be recorded by the movement of the limb and play back by the push of a button. This is not of course the correct programming, but it can very quickly store movements, which can then be retrieved. This „programming mode“ is suitable for everyone who shuns the correct programming. Another mode is the recording of motion sequences with the Meccanoid app (for Android and iOS). In the app is a virtual robot available whose movements can be transferred to the real Meccanoid. This method also provides no proper programming, it also only records movements. Correct programming, however, is possible with the „drag and drop – programming“ in the app. Here simple programs can be put together, which is similar to how a flow chart is built. It can be used on events (inputs) such as time, engine movement, button pressure, etc be it responsive and affiliated movements, speech, LED color change and other operations will be launched. Here we can also easily learn how to program operations and programming constructions (loops, conditions). Since the Meccanoid contains no additional sensors, the possibilities here unfortunately are somewhat limited. The app offers an interactive tutorial with an English language edition and German subtitles. Appealing to children here is the ‚Coach Meccanoid‘ virtual robot that gradually step by step guides them on using the app. 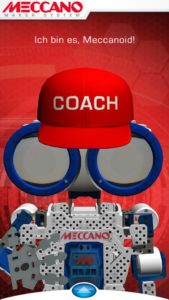 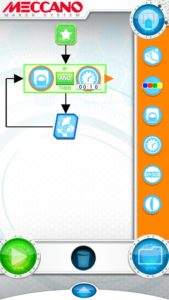 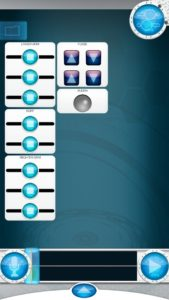 Is the Meccanoid good for use in the classroom? No. With a construction period of 5-6 hours, the building period will take too long for teaching. The learning processes through movement of the robot offers no learning effect. The use of the built-in voice control and dialog function (which did not want to work with me in German), is based on volume which is not suitable for a class room. Drag- and -drop programming is certainly suitable for the classroom, unfortunately there is the lack of tasks set or instructions for the teaching of Meccano. The introduction to simple programming sequences can be taught with some adequate preparation. Additional advanced features give hope that the  Meccano can provide a download portal for „open source programming“. Here you will find sample projects and libraries to control the meccanoid by third-party hardware.

As far as my impression of the Meccano Meccanoid XL 2.0, should you have questions or suggestions, you would like to use the comment function. Pictures and videos of the set up will be available here soon.