San Fransisco, California/US​ – January 10, 2018​ – Easycube brings innovation to an old standard toy: the building block. Playtime is much more sophisticated now than when building blocks first made their way to toy boxes. With EasyCube, children get a completely new experience. 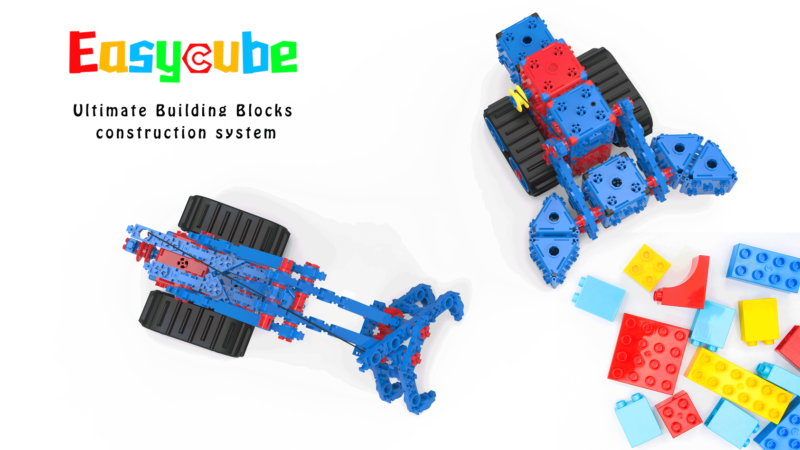 Easycube are building blocks that safely conduct electricity. This enables those building to assemble a variety of different creations from houses to cars and more. The electric power systems are independent to each cube. This modular design feature allows users to add the power cubes to any position. Easycube also offers a new type of splicing interface for better assembly.

Easycube is easy enough for those aged six years or older. But kids aren’t the only ones who will enjoy Easycube. It’s great for all ages. Anyone with a creative mind will find these blocks exciting and fun. Kids and adults will appreciate the do-it-yourself electric building blocks. These blocks are great at stimulating young minds and fostering curiosity. More than just fun, they’re a great tool in early childhood development.

Easycube offers over seven different kinds of engineering vehicles in one kit. A kit includes a battery, one motor block, one control cube, three power cubes, two basic cubes, four triangular cubes, two rotating modules and various fittings. The three power cubes and control cubes can be connected by three extendable magnetic lines. With the telecontroller, users can control all three power cubes at one time. Silicone cushions are installed at each corner of each cube, and are harmless to children.

Founder Yuchen Tao said, “With Easycube, creativity is unlimited. Anyone can have fun with these blocks while also learning some valuable information about technology and the fundamentals of construction. We are very excited about the mark that Easycube will make on the toy and technology industries.”

Easycube has worked for over two years to bring their revolutionary building blocks to market. The idea was conceived in July 2015. The next few years focused on design, planning, mold creation, and R&D testing. Now that the idea has been validated, the time has come to move forward with making Easycube available to everyone. To do that, Easycube has created a crowdfunding campaign. As a well-funded, highly efficient technology company, Easycube strives to communicate with supporters to deliver products as soon as possible. Find out more about the crowdfunding campaign at Kickstarter.

Easycube was launched in 2015 with the idea to make block play more engaging. From this idea came modular robotic building blocks. These blocks allow for fun and learning as one. With multiple sizes and shapes, Easycube blocks create a new play experience for both kids and adults. Learn more about Easycube at easycube.club.