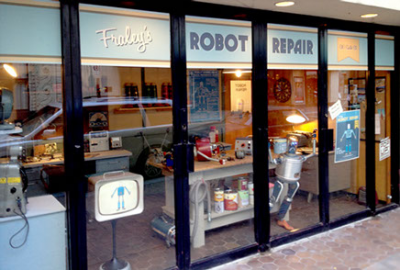 Fraley today announced the launch of a website, www.pitrobotrepair.com, and Kickstarter crowd funding campaign to raise money for the installation. Fraley must raise $10,000 thousand between May 19 to June 17, 2015 in order to fund the project. Individuals who donate, or backers, of the project will receive tokens like stickers, pins, signed prints, or even an art piece from Fraley’s previous installation.

The artist says the Allegheny County Airport Authority is supplying the space at no charge on a temporary basis, but public support is necessary for the creation of this new piece of artwork.

“While Pittsburgh International Airport has shown a commitment to public art and featuring regional artists, there currently aren’t funds available for additional projects,” Fraley said. “However, the temporary vacancy of the space provides an opportunity to showcase regional projects to visitors from across the country and across the globe.”

The PIT installation will be three times larger than Fraley’s original Downtown Pittsburgh site. Situated in Concourse A near Southwest Airline’s busiest gate, A15, construction is slated for July with an opening scheduled for late August or early September 2015.

Fraley added, “While visitors may recognize a few components of the original installation, this will be an entirely new work. I hope plans for non-ticketed individuals to access the airside terminal of PIT come to fruition allowing the general public to see the project first hand.”

The original installation was part of Project Pop Up Pittsburgh, a collaboration between the mayor’s office, the Urban Redevelopment Authority, Department of City Planning, and Pittsburgh Downtown Partnership to fill vacant storefronts with start-up businesses, art installations, or performances as a means to attract permanent tenants. After an 18 month run in Pittsburgh’s Cultural District, Fraley’s Robot Repair and the adjacent vacant restaurant later became the restaurant Butcher in the Rye.

“The response to the Downtown location of Fraley’s Robot Repair was overwhelmingly positive from daily commuters, occasional visitors, and even out-of-towners who,,” said Fraley, who received the 2012 Pittsburgh Downtown Partnership and City of Pittsburgh ‘Mayor’s Award for Public Art’ for the project. “I still hear from people asking me to bring it back and I’m excited to do so in partnership with Pittsburgh International.”

“The Allegheny County Airport Authority is pleased to support Mr. Fraley’s fundraising efforts and offer a new space for The Robot Repair Shop as part of the expanding Art in the Airport program at Pittsburgh International Airport,” said Richard Belotti, Vice President of Planning. “We know that the original installation in Downtown Pittsburgh was very successful, and we are delighted that millions of travelers each year will once again be able to experience this unique and playful piece.”

Toby Atticus Fraley is an artist born in Washington, PA in 1977. Currently, he lives in Bridgeville, PA where he maintains a studio as a full time artist. His work consists of mixed media sculpture, public art pieces, electronic/interactive sculptures, and Americana themed oil paintings. Toby’s most recent project, The Artwork Forge was just shown in Scottsdale AZ, commissioned by Scottsdale Public Art and Arizona State University. Recent exhibitions featuring his work include The Pittsburgh Biennial, Art in Odd Places: Indianapolis, SOFA in Chicago (Represented by the Pittsburgh Glass Center) and a solo show at SPACE gallery in Pittsburgh entitled, The Secret Life of Robots.