*Kickstarter launching on September 15, 2015 at
https://www.kickstarter.com/projects/neuronrobotics/wifi-dyio-robot-controller-w-24-channels

The WiFi DyIO (dynamic input and output device) is a wireless
micro-controller with 24 channels for robots, precision lasers, medical
equipment, 3D printers, motors, cameras, data sensors and more. With the
second generation WiFi DyIO, you can control all your devices with a
computer or Android phone—even with little programing knowledge. And
because WiFi DyIO simply coordinates the processors on your computer
wirelessly to your robot, it operates with JAVA programing language from
across the room, or around the globe. 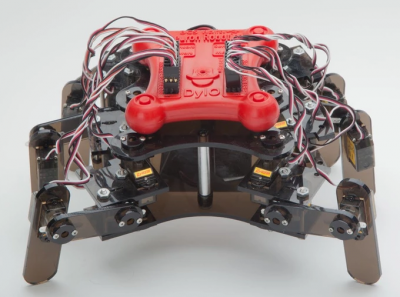 The controller works seamlessly with Neuron Robotics Cooperative’s
<https://neuronrobotics.com> free, open-source
software, BowlerStudio, which allows the virtual design and testing of
different robotics systems and parts. There are powerful modeling tools for
adept programmers, as well as easy-to-use, customizable templates for
first-time designers. Features include coordination with 3D printers to
quickly and effortlessly print custom limbs, bodies and other parts.

The DyIO/BowlerStudio system is simple and intuitive for classroom lessons
with 8-year-olds, and powerful enough for a Ph.D robotics engineer. Its
software was used to perform surgery within an MRI
<http://spectrum.ieee.org/automaton/robotics/medical-robots/inside-an-mri-a-nonmetallic-robot-performs-prostate-surgery>
and the DyIO itself is used to teach classes at Worcester Polytechnic
Institute.

DyIO and BowlerStudio have been featured on 3DPrint.com, 3ders.org and is a
semifinalist for the Hackaday Prize.

The first generation, USB-connection DyIOs are available at Microcenters
throughout the U.S. and are being used in college and grade school
classrooms. In order to take the functional WiFi-enabled prototype into
production, Neuron Robotics Cooperative is looking to Kickstarter for
$35,000.