Unsatisfied by low cost, low precision and poor functionality desktop robotic arms on the market, a group of six hardcore robot makers decided to quit their high-paying industry jobs, and build their own. Named its first product Dobot, the team’s mission is to bring industrial precision to consumer, affordable robotic arms that can actually DO the job. 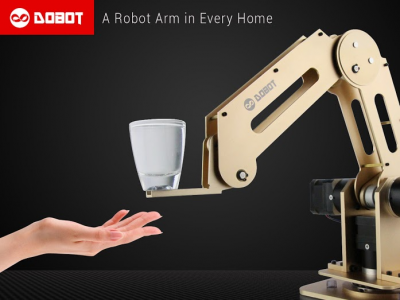 The robot has tackled a series of technical difficulties struggled by other analogs. Here’s a list of its feature highlights:

For making it even more friendlier to both makers and the general public, Dobot’s design is well-fit for desktop applications, see its tech specifications:

The team has premiered its prototype at the 2015 Shenzhen Maker Faire, and has received positive feedback from makers, robot experts and open hardware communities ever since. “…the motion is really precise…it’s not just a toy, it can also be used to build stuff.” Says the CEO of Arduino, Massimo Banzi. On the popular DIY sharing platform Instrucables, its step-by-step instruction on building a robotic arm has received more than 23k likes in the first four days and got featured on the first page.

Upon their launch on Kickstarter, the team is very optimistic on the future performance of Dobot, marching their way to helping the world’s robot lovers to explore the beauty excitement of making stuff.

The team was founded in June 2014 by a group of industrial robot engineers based in Shenzhen. The team’s CEO, Jerry (Peichao) Liu, and the head of engineering Art (Xulin) Lang both graduated from Shandong University in mechanics engineering. Jerry received its Masters from China Academy of Sciences, majoring in mechanics engineering and joined a robot company focusing on industrial robots for medical applications. Art during his Masters program, solely designed Delta parallel manipulator, Scara robot and a few others. After school, as the head of Scara robot project, he worked with Foxconn. All the founders all acquired extensive industry experience in robotics before joining the team. They have deep belief in bringing industrial precision robots to everyone’s desktop and in the future will launch a series of new models.