A London inventor has created an educational robot that kids can use to boss around their parents. 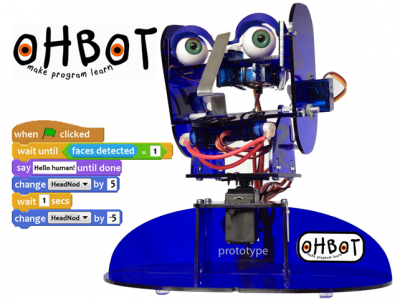 Mat Walker, and his business partner Dan Warner, have together developed OhBot, a talking robot head that can be programmed to follow simple instructions. The educational robot was created in the top room of Walker’s house in Hornsey, north London. And now the invention is set to be sold worldwide.
Primary school kids as young as seven can teach Ohbot to tell their parents to “Go and tidy your room”, “To eat up your broccoli” or to “switch the telly off at once!”

Mat Walker, a roboticist, said: “Ohbot is a brilliant way to teach kids the skill of coding – what parents used to call ‘computer programming’. Most children find programming Ohbot really easy to pick up. They’re much better at this sort of thing than their parents.

“Ohbot can do so many things. It can talk, move its head, smile and frown. You can program its eyes to follow you around the room.

“Ohbot is great for children of all ages from about six. It appeals as much to girls as to boys.

“But what kids like the most is the way it talks. You tell it what to say and its lips synchronise automatically with the words you’ve given it. I’ve seen so many children make Ohbot tell their parents to behave!”

Co-creator Dan Warner added: “Kids love accessorising Ohbot. You can make some hair out of pipecleaners, stick a hat on it, give it a pair of cool sunglasses.”

Ohbot is different from previous educational robots because it’s in “human” form, rather than “turtle shaped” like the vast majority of robots that have been in schools since the 1960s.
Walker says: “Turtles are fine. But why shouldn’t children create and invent using a robot that looks just like them?”

Unlike most of those old-fashioned robots, Ohbot can talk, display emotions, act, react and solve real world problems.

It can be programmed to teach spellings or maths, ask questions and record the answers, even lead a cookery demonstration! You simply plug Ohbot into a PC computer and it’s ready to be programmed. Until now, Walker and Warner, from Stroud in Gloucestershire, have been taking their invention around schools.

But this month (17 Oct) they have released it on sale directly to families.
Anyone wanting to buy one simply logs on to the kickstarter website www.tinyurl.com/ohbot2  and pledges either £149 for a ready-made Ohbot or £99 for one in kit form – and as soon as 100 pledges have been made, the production line will start producing the robots, ready to be delivered in time for Christmas.

Walker says: “Ohbot has been a tiny cottage industry so far but it’s ready to move into the mainstream.

“We’ve taken Ohbot into lots of schools and they love it. But now we’re ready to offer Ohbot directly to parents and grandparents at home.”