HAYWARD, Calif. (October 20, 2015) — Dash Robotics today unveiled the first generation of bio-inspired Kamigami robots, the first advanced robot toy available for less than $70. Kamigami are fast, lightweight, build-it-yourself robotic toys that snap together in an origami-like fashion. Kamigami fit in the palm of your hand, run very fast on six legs, and are controlled by a programmable mobile app (for iOS initially, Android coming in 2016). Kamigami will be available initially through Kickstarter, for $49 – a 30% discount off the MSRP of $69. Kamigami will be available directly from Dash Robotics and at Amazon.com in 2016. 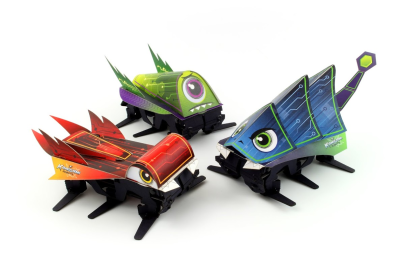 Dash created Kamigami robots to bring programmable robotics to the mass market. Its low price point makes it the most accessible robotic toy ever. The DIY nature of Kamigami along with the simplicity of drag-and drop programming for changing and evolving each individual robot is intended to inspire kids everywhere to engage with, and learn from, advanced technology in a way that is easy, affordable, social and fun.

Kids can use easy drag-and-drop programming within the mobile app to modify the behavior of each individual robot, and can toggle between individual and team play modes. A simple yet sophisticated set of electronics included with each robot are easy for anyone to install. These include a small circuit board, battery, a light sensor, IR sensor, gyroscope and accelerometer, which combine to bring Kamigami to life. With the IR sensors, Kamigami robots can tag one another remotely in team play modes, such as tag or battle games. IR signals transmitted from one robot to another can cause different player-designed effects on the tagged robot.

Kamigami are evolved from the initial Dash Robot beta, released last year to test design and get early customer feedback. The core “skeleton” or chassis of Kamigami looks much like the original Dash beta, whose rapid movements mimic the movements of animals, particularly cockroaches and lizards. The founders of Dash studied biomimicry and robotics at the University of California, Berkeley. In a new twist, Kamigami feature interchangeable shells that snap over the chassis, turning the robot into a colorful creature from out of this world.

Nick Kohut, co-founder and chief executive officer of Dash Robotics, said, “We designed Kamigami so kids could discover a fun new way of learning. Our mantra is ‘build, program and evolve’ and Kamigami helps kids do just that. It’s the first DIY programmable robot that is affordable for everyone.”

■ Do-It-Yourself: Kamigami can be assembled without tools in under an hour. No glue or soldering required.

■ High-speed: High speed and robust locomotion inspired by some of nature’s fastest runners.

■ Durable: Robot’s flexible construction allows the robot to shrug off falls and collisions.

Each Kamigami robot can be programmed with a unique set of behaviors and characteristics.

This enables a wide range of individual and team play modes that take advantage of the robot’s sensors and functions. Games that can be created include:

■ Sumo-bots – first to fall off the table loses points

■ Tanks – take turns trying to get into firing position

Most robots today are constructed either with hundreds of expensive injection-molded parts, or metal fastened together with steel bearings. They require an individual motor, or actuator, for each joint, making them slow, expensive and heavy. To overcome these fundamental challenges, Dash constructs its robots with a material made up of highly durable yet lightweight plastic.

This material fastens together using flexible plastic joints, or flexures, rather than ball bearings. Because of this design approach, Kamigami robots require only one or two actuators – another significant reduction in cost for both prototyping and manufacturing.

This rare combination of new composite material, intelligent design and innovative manufacturing results in robots that have much greater mechanical flexibility, are much faster, are lighter in weight and can be sold at a fraction of the cost of any competitor.

Dash Robotics was founded in 2013 by four UC Berkeley PhD students on a mission to make advanced robotics simple, fun and affordable for everyone. Dash has received a round of seed funding led by IronFire Capital, which has a track record of success investing in early-stage companies including Songza (acquired by Google), Streem (acquired by Box), Caviar (acquired by Square) and many others. Dash is headquartered in Hayward, California.