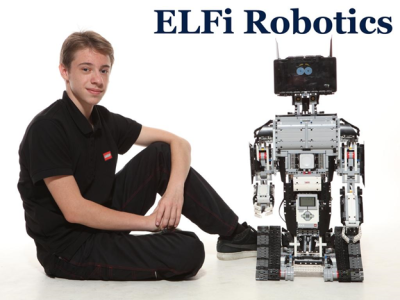 28 of October 2015 – New startup ELFi Robotics based in Ukraine announced today that it is raising funds via  rewards crowdfunding campaign on Kickstarter to finish the development of their revolutionary Android apps for robotic applications. The company set out to raise £33,000 on KickStarter to finish development of innovative software platform for DIY smart robots built with wide-accessible construction sets of Lego, Tetrix, Arduino and Raspberry Pi .

ELFi Brain App is a robotic brain which can be installed on Android device and connected to LEGO EV3, Arduino or Raspberry Pi controllers. So any LEGO Robot can receive its missed brain from now on!

ELFi Educational Program covers both hardware and software aspects required to understand basics of robotics. Both aspects start from very simple patterns and don’t assume any previous experience in robotics. ELFi Robotics WorkBook and Building Instructions Book by Mark allow a quick start for any beginner.

The powerful concept of RoboMarket and “Robotics for programmers”  book allows third-party developers to write applications for ELFi Robots and even sell them.

According to Mark Drobnych, 15 years old CEO of ELFi robotics: “Our main target is to provide robots to everybody. Nowadays, real robots are really expensive and rare. I think it’s time to enter  the new era of technologies. Build your own robot, with own design, and own set of functions! Our Brain app and platform are flexible enough to support new robotics ventures.”

The story begun two years ago when 13-years old Mark Drobnych worked on his personal scientific research: School Presentation of  Microscope. The results of this work were presented at the Final of Google Science Fair 2014 in Mountain View, California. As functions of microscope started being more complex Mark had an idea to create an universal Robotic Brain on top of Android operating system. This Brain had to create human-friendly spoken interface not only for his Presentation of Microscope but for ANY ROBOTIC BODY built with Lego, Arduino, Tetrix or Raspberry Pi parts. It was ELFi birth.

To enforce his progress on software part Mark involved his dad, Oleksiy Drobnych, PhD, into the project as an experienced software engineer.

In the UK Mark is represented by Androcommerce Ltd., registered in England family firm focusing on mobile e-commerce offering.