BoxBotix is an open source, modular robotics framework that is designed to be easy to hack, make, use and sustain. BoxBotix is the creation of Rocketship Systems Inc., a small robotics company in Fort Collins, CO. 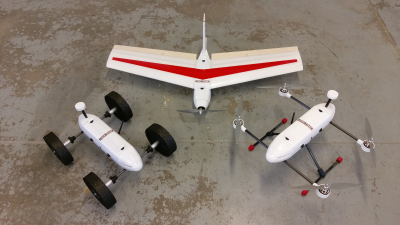 “We run a small shop that machines robot parts, and we get a lot of calls from customers who have a new sensor or technology they want to test, but no robot to put them on,” says Coby Leuschke, President of Rocketship Systems. So for the last two years they have been designing and testing a new system to meet these needs. BoxBotix is the result.

Leuschke continues, “We have seen many different drone and robot systems emerge in the last year that try to meet the demands of a growing industry, but most are mass produced and difficult to customize. We wanted to create a system that allows people to move the design, build, maintenance cycle closer to the point of use, so they can control their own robot destiny. ” In order to meet these requirements BoxBotix has been designed to be built using desktop 3D printing and readily available parts and tools. Garrett Day, Rocketship Systems Lead Engineer adds, “We are releasing all of our design files under an open source license, so we can provide people the opportunity to modify the design to meet their specific needs, and help improve the overall design.”

The initial release of BoxBotix will feature robots, called BBots, which include the BBCopter, BBPlane and BBRover. Rocketship Systems will provide kits in two versions: A Bring Your Own Printer Kit, where they will provide everything needed to build a frame, excluding the printed parts, and they will also provide a Full Frame Kit that will include everything required to build the frame.

“BoxBotix is not about Rocketship Systems building a million robots. BoxBotix is about enabling a community of a million people to build their own robots,” Leuschke concludes.

In order to fund the creation and growth of a strong open source community BoxBotix has taken to Kickstarter. To follow their project, be sure to find them on Twitter , Facebook or YouTube, and spread the word to your social media networks. Consider donating as little as $1 to help their project come to life. If you decide to donate more, you can be among the first in the world to build a BBot.