Daegu, Korea – February 16, 2016 – Kamibot, the first robot that makes learning to code truly fun for kids (and kidults), will launch on Kickstarter on Tuesday, February 16.

Kamibot is a cute, programmable edtech robot, about the size of a coffee mug. It is based around Arduino, so kids can easily program it by using a drag-and-drop programming language like Scratch. The programming skills kids learn with Kamibot are easily transferrable to real-world applications. 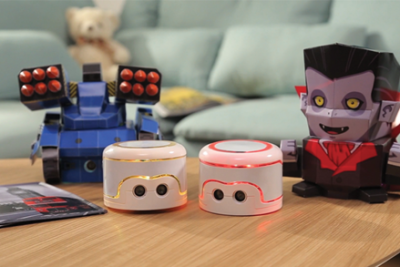 “Unless we make programming fun, kids are never going to stick with it,” said Alvin Chae, co-founder and CEO of 3.14, the company that makes Kamibot. “That’s why we put so much effort into the fun elements of Kamibot, creating colorful papercraft skins that let kids dress up Kamibot, and included the ability to control Kamibot with a smartphone or tablet.”

Kami (紙) is the Japanese word for paper, and is at the root of the word origami (折り紙), literally folding paper. The Kamibot team have already created about half a dozen unique papercraft skins that kids can print out, color, and fold to customize Kamibot and give it character. These include The Count, Frankenstein’s monster, a warrior robot, a tank and a missile launcher tank. The company is also working on striking licensing deals for popular cartoon characters.

While Kamibot is undeniably fun to play with, it also packs some serious hardware. It’s brain is an Arduino compatible board, based on the open-source standard widely used by the maker community around the world. It also includes front-facing ultrasonic sensors that help it recognize and avoid obstacles and navigate through mazes or around a room. Downward-facing IR sensors allow Kamibot recognize and race along a black line on the floor. DC motors power the wheels, and a servo motor allows the heads of the papercraft characters to rotate from side-to-side. Color changing LEDs brighten up Kamibot and make it even more colorful. 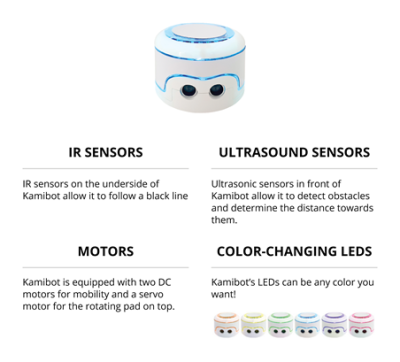 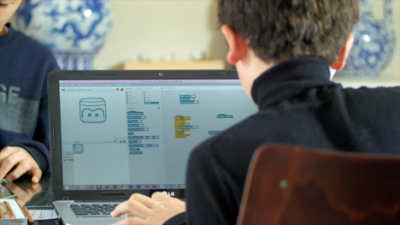 Throughout 2015, Kamibot was tested in Korean classrooms and earned high marks both from students aged 10 to 17, and their teachers. Now Kamibot is ready to launch on Kickstarter on Tuesday, February 16 at 7:00 a.m. EST. Super earlybird prices start at $79 plus shipping. Pre-orders close after 30 days and Kamibot will ship to backers in June. For more information, visit Kickstarter and search for Kamibot.