Montreal, Canada, February 10 2016 — InnoTechnix is pleased to announce the launch of its new crowdfunding campaign for the Maximo Robot Arm on Kickstarter:https://www.kickstarter.com/projects/itnx/maximo-robot-arm 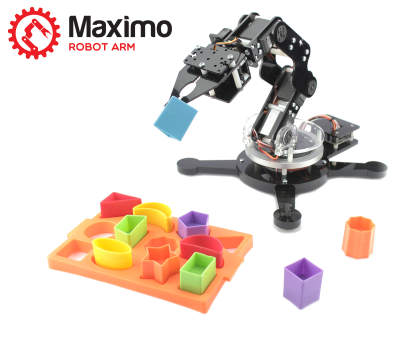 The Arduino robotic arm will look and act great on any desktop! Maximo is an Arduino-driven, 5-axis robotic arm with a laser-cut acrylic body. The robot comes with Robotic Studio software and can be controlled using a gamepad. Maximo will also play through a series of recorded steps, executing complex automations. Only a screwdriver is required for the assembly or it can be sent fully assembled.

Another great advantage of Maximo’s design is the head of the arm, which can be changed within seconds for another module. The regular claw is a gripper included with each robot. A more sophisticated gripper head module allows Maximo to grab objects by applying balanced pressure. The palletizer head module is a miniature reproduction of the ones used in factories and warehouses. The pen-holder module allows various objects to be placed on Maximo’s head (pen, laser pointer, drumstick, etc.).

The campaign offers many add-ons like the Webcam Attachment (includes a hi-res webcam with mounting system), Phidgets Board, LED lighting system. Regularly priced at just USD$349, with Early Bird pricing at USD$290 for the first 200 lucky owners. Following the Kickstarter campaign, the MSRP will be USD$399

About InnoTechnix: Launched in 2011, InnoTechnix inc. has developed a variety of robots, robots arm, custom gripper, talking robots, intelligent clocks and mobile robots. InnoTechnix takes care of both the design of robots, manufacture of parts and development of robotics software. InnoTechnix Robots have appeared on television shows like Dragons’ Den, Mr. Net, Main Entrance, Cogéco TV and a television commercial for the Ford Focus.