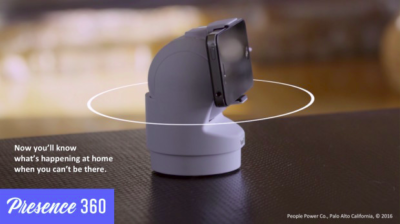 Traditional security cameras are costly and only let you see a single static view, which leaves users blind to anything outside of the camera’s visual range. Presence 360’s full pan-and-tilt and 360-degree rotation allows users to look all around. Users can customize how long the camera remains at each vantage point too. Set Presence 360 to automatically pan to the front door for 15 seconds, the kitchen window or any other area of the home. Presence 360 cycles through those vantage points automatically to search for intruders or activity — recording video the instant motion is detected. When motion is detected, a Presence Video Alert of the activity is sent straight to the user’s smartphone as well as to their trusted circle of family and friends.

“In an era where technology is helping workers make impressive strides in productivity, we still find a big need for technology that lets consumers know what’s happening at home when they can’t be there,” said Gene Wang, CEO and co-founder of People Power. “Unless you’ve budgeted for a complicated and expensive home surveillance system, you may never know what’s happening until it’s too late. By revealing those nagging blind spots, Presence 360 brings people peace of mind, and is paving the way for a new era of lifestyle security.”

The Presence Security Pack extends the value of Presence 360. It works through the Presence app and combines entry, motion, water, humidity, temperature and touch sensors to create a whole home monitoring solution.

Presence 360 is compatible with iOS and Android smartphones. To pre-order Presence 360, visit https://www.indiegogo.com/projects/presence-360-smartphone-security-camera-robot-99-app#/.

About People Power
Founded in 2009, People Power Company is an award-winning software company with a successful legacy in mobile and cloud technology. The People Power IoT Suite enables rapid connection, engagement, delivery and management of IoT products and services for services providers, manufacturers and consumers searching for connected lifestyle enhancements. Its ready-made cloud and mobile software stacks connect people with networked devices to humanize the Internet of Things. Services from concept through commercial release enabled by People Power are available as white-labeled solutions for customers around the world. For more information, visit www.peoplepowerco.com