Lille – France – February 14, 2018 – Robby, the first robot entirely hackable and adaptable, with Plug & Play extensions to awake your creativity, has now reached more than 55% of its goal on Kickstarter (http://kickstarter.mr-robotics.com). Robby is the spark of curiosity everyone need to learn and create. Our evolutive robot is simple enough for beginners to learn step-by-step programming & robotics and powerful in order for the most advanced ones to create, prototype and use it as an open-source working base.

Curious innovators or students just have to follow the three easy steps below to create, learn and prototype:

choose the architecture: build the robot step-by-step starting by choosing its architecture according to its locomotion: holonomic (with three omni-directional wheels) or differential (with two classic wheels) training;
Add and remove Plug & Play extensions easily to the rhythm of your projects to achieve original constructions and more or less complex robots;
Program the robot with an intuitive Arduino library, lots of examples, tutorials, and a visual programming editor. For the most advanced one, you can participate to the open-source library and add your own functions. 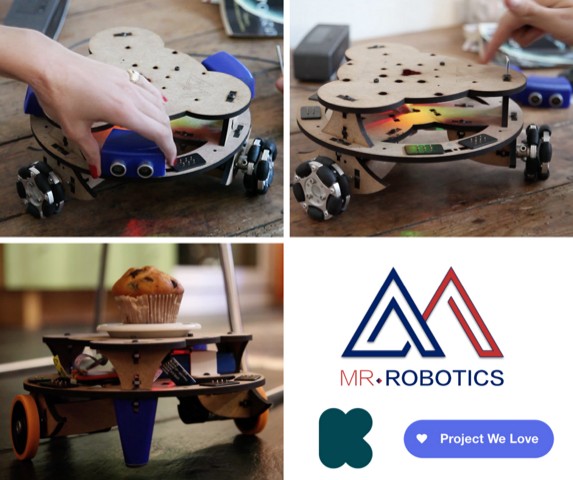 Our goal is to stimulate the curiosity of everyone. We believe that learning complex disciplines can be achieved intuitively and with fun. Based on modularity and simple programming, our robots are designed to familiarize you with robotics, introduce you to programming and realize the most ambitious technological. But beginners aren’t the only one who will enjoy Robby. Based on an ARM Cortex-M4F 32 bit 120 MHz microcontroller, with a 12V extra long life Lipo 3S battery, DC-12V precise motors and incremental encoders, advanced ones will be able to program quickly a powerful platform that will be completed with DIY modules (breadboard sensors and extensions).

From the simple proximity sensor to the multi-articulated arm or the DIY sensor, several dozens of different configurations are possible and available to you! So don’t wait any longer to imagine and conceive! Robby can be used as a slaved robot, in order for everyone to discover, prototype, learn and create.

Mr. Robotics has worked for over one year to bring Robby to market. After dozens of prototypes and R&D testing, we have validated and tested our robot. The time has come to move forward with making Robby available to everyone, and that is why we launched a crowdfunding campaign. Find out more about the crowdfunding campaign at Kickstarter or on our website.

We are three French students, who have launched the project one year ago. Olivier is currently doing an Engineer School at ENS Paris Saclay and working on the hardware and software. Guillaume, an alumni of Supmeca Engineer School, is currently focusing on the design and the production of the robot, in order to deliver everyone in time. Mathieu is at EDHEC Business School in Lille and manages the Marketing and Sales part.