Introducing Cubroid’s second robot project: ARTIBO! Cubroid originally launched in 2017 with its AI educational Coding Blocks and is back with a new robot for coders, non-coders, kids and adults all alike. Only having been showcased at trade fairs such as The International Consumer Electronics Show (CES) and The Mobile World Congress (MWC) so far, Cubroid will now make Artibo available to general consumers.

Currently robots trendy among those with interest in such technology. However, going forward, robots will have a huge influence on people’s daily lives as a whole. “We put our best effort forward to make everyone who is interested in robotics have an opportunity to easily enjoy this robot. That’s why being well-designed and functional is key in how Artibo was created” says CEO and Founder, Mark Shin. 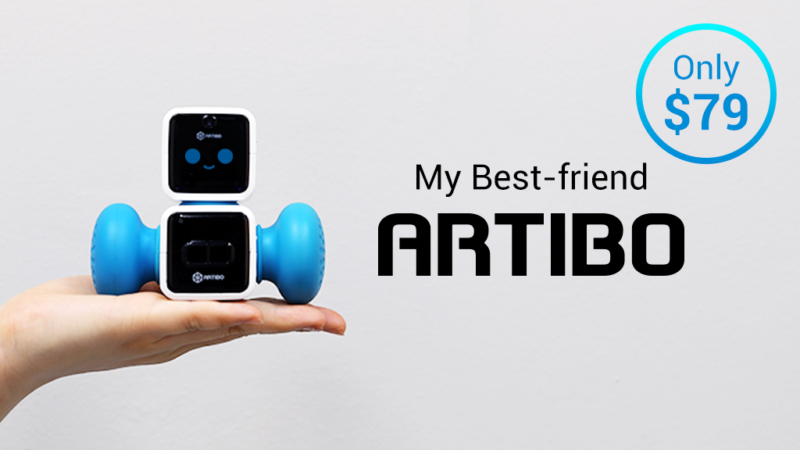 Artibo is your very own AI best-friend, designed to make daily life that much more simple. An at-home assistant that is small enough to fit anywhere and also efficient enough to go anywhere you go.

Artibo comes with an AI block (which houses the camera, microphone, speaker and LED screen), a motor block, a connector block (to join the AI and motor block) and silicon wheels.

When all the pieces are connected, Artibo stands at approximately 97mm tall and weighs less than a pound (240g) – with the AI block weighing less than half a pound

With separate (but buildable) parts, you can separate the AI block and place it on your desk while you work or connect all the parts and have Artibo follow you from one room to the next. With Artibo, buying multiple to have one in every room is unnecessary.

The features you would like your Artibo to display are customizable from a list of features such as walkie-talkie, scheduler, music, voice recognition, and many more. Each feature having a corresponding display that is shown on the LED screen.

Keeping with the core of what Cubroid does, you can also code Artibo for even more personable interactions and functionality. Kids can also continue their coding education from coding with Cubroid Coding Block to now coding with Artibo.

On Kickstarter preorder of Artibo will be available from July 31st 2018 to September 30th 2018. With Super Early Bird prices starting as low as US$79. Artibo’s prices are set so low to give as many people as possible the opportunity to afford and experience such a robot. After achieving the set goal, Cubroid estimates manufacturing and delivery to be completed by the end of November 2018. We proudly introduce you to your own AI robot: Artibo!