May 4, 2019: Today, the LEGO Group unveils the latest addition to its much-loved Star Wars™ range – and it’s something even Yoda’s Force sense didn’t see coming. The new LEGO Star Wars BOOST Droid Commander set offers all the creativity and coding fun of LEGO® BOOST alongside the chance to build three of the film franchise’s most iconic droids: R2-D2; the Gonk Droid; and the Mouse Droid.

It’s the first time the intuitive drag-and-drop LEGO BOOST coding technology has been used in a LEGO licensing product. With the technology overhauled to match the LEGO Star Wars galaxy, the result is a whole new play experience in which kids and parents can team up to build, code and play with the droids, then create their own Star Wars stories and battlegrounds with inspiration from 40+ interactive missions. What’s more, every time they play with this LEGO Star Wars brick galaxy of lovable droids, they will also be honing their STEAM (Science, Technology, Engineering, Arts and Maths) skills, which are ever more important for children in today’s digital world.

Julia Goldin, Chief Marketing Officer, LEGO Group, said: “We’ve been fuelling the imagination of young Padawans and Jedi Masters for twenty years and wanted to take the Force to a new level. By introducing LEGO BOOST and creative coding into the LEGO Star Wars galaxy, kids now have the chance to develop essential 21st century skills while immersing themselves in the amazing world of Droid Commanders. Our children are the problem solvers of tomorrow and STEAM skills will be essential to help them conquer the challenges of the future.”

The LEGO Star Wars BOOST Droid Commander set is the latest example of how the LEGO Group is using product innovation to help boys and girls gain vital STEAM skills like creativity, critical-thinking, problem-solving and communication – all while enjoying the thrill of playing with their favourite LEGO Star Wars characters.

Launching globally September 1, 2019 just in time to mark the upcoming release of Star Wars: The Rise of Skywalker, all three droids (R2-D2, Gonk Droid and Mouse Droid) included in the set are great fun to build, code and play with, and completely customisable for every child.

“These are the droids you’re looking for.”

STAR WARS and related properties are trademarks and/or copyrights, in the United States and other countries, of Lucasfilm Ltd. and/or its affiliates. © & TM Lucasfilm Ltd.

About the LEGO Group:
The LEGO Group’s mission is to inspire and develop the builders of tomorrow through the power of play. The LEGO System in Play, with its foundation in LEGO bricks, allows children and fans to build and rebuild anything they can imagine.

The LEGO Group was founded in Billund, Denmark in 1932 by Ole Kirk Kristiansen, its name derived from the two Danish words LEg GOdt, which mean “Play Well”.

Today, the LEGO Group remains a family-owned company headquartered in Billund. However, its products are now sold in more than 140 countries worldwide. For more information: www.LEGO.com

– Building on the company’s history of merging digital programming and physical building, LEGO BOOST will inspire a younger generation to build and code their way to limitless play – 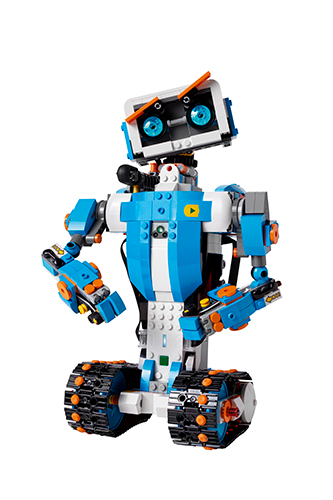 LAS VEGAS, Jan. 4, 2017 /PRNewswire/ — CONSUMER ELECTRONICS SHOW – Today the LEGO Group announced LEGO® BOOST, a supercharged building and coding set that lets children bring their LEGO creations to life by adding movement, sound and personality. Unveiled at the Consumer Electronics Show in Las Vegas, Nevada, LEGO BOOST will be previewed to members of the global media at Digital Experience! on January 4 and will be demonstrated to CES attendees as part of the [email protected] Kids & Technology Marketplace from January 5-8, 2017 at the Sands Expo. With a suggested retail price of $159.99 (USD), LEGO BOOST will be available in the second half of 2017. 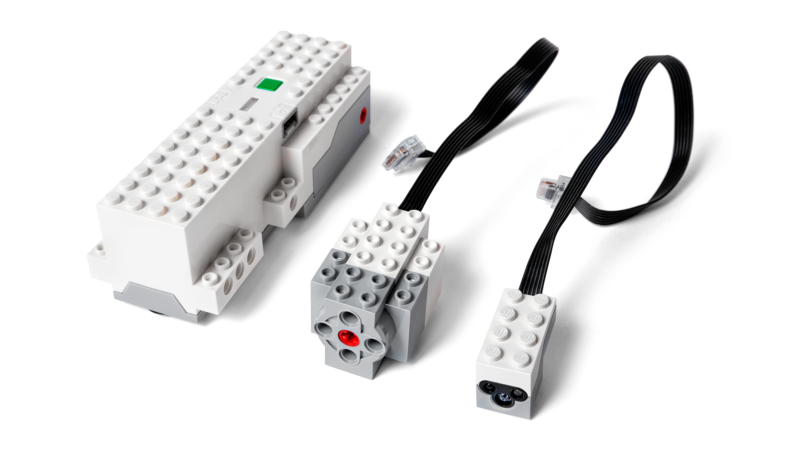 Build the Toy You Want

LEGO BOOST combines the endless play opportunities of a traditional LEGO set with an endless variety of movement and sound capabilities made possible through an easy-to-use, app-based coding environment. LEGO BOOST was developed for children ages 7 and older by an international team of LEGO designers. Using familiar LEGO elements and simple coding language, LEGO BOOST delivers an intuitive approach and opportunities for quick success.

Powered by a Move Hub, a LEGO stud-covered brick with built-in tilt sensor upon which children can add LEGO elements, motors and a sensor that combines color and distance detection, LEGO BOOST brings movement to any LEGO creation. The set includes building instructions for five diverse models; Vernie the Robot, Frankie the Cat, the Guitar 4000, the Multi-Tool Rover 4 (M.T.R.4), and the Autobuilder, each designed to give children the basic building and coding skills needed to express their creativity by personalizing whatever they build.

„We know that children dream of bringing their LEGO creations to life, and our chief ambition for LEGO BOOST is to fulfill that wish. Once children build a LEGO creation, we give them simple coding tools to ‚boost‘ their models by adding personality,“ said Simon Kent, design lead for LEGO Group. „We want children to first and foremost have a fun and limitless play experience, adding the coding opportunity is the means to get there.“

Coding Brings Your Toy to Life

LEGO BOOST introduces children to coding through a free downloadable app that contains the guidance, building instructions and simple coding commands to bring to life five LEGO creations, one at a time. Much like building with LEGO bricks, children build behaviors and actions by linking digital coding blocks in an easy-to-understand horizontal layout. To further personify the experience, LEGO BOOST lets children add voice recordings to their creations, adding personality without requiring spelling and typing. The app also includes more than 60 activities designed to inspire additional building, coding and play.

To further inspire creative building and coding, the LEGO BOOST app includes a „creative canvas“ that includes basic building instructions for three simple base models that children can use to customize their own LEGO creations. The three bases available at launch include: a walking base for making animals like a dragon or a pony, a driving base for building vehicles like a dune buggy or rover, and an entrance base so that children can make their own castle, fort, or even a futuristic space station. Once children are comfortable with building and coding the various LEGO BOOST models, they can use the kit to „boost“ any LEGO creation – from LEGO CITY and LEGO  Friends to LEGO NINJAGO and The LEGO BATMAN Movie.

LEGO BOOST uses 6 AAA batteries. Alkaline batteries are recommended, but rechargeable batteries can be used, though may result in weaker power output. 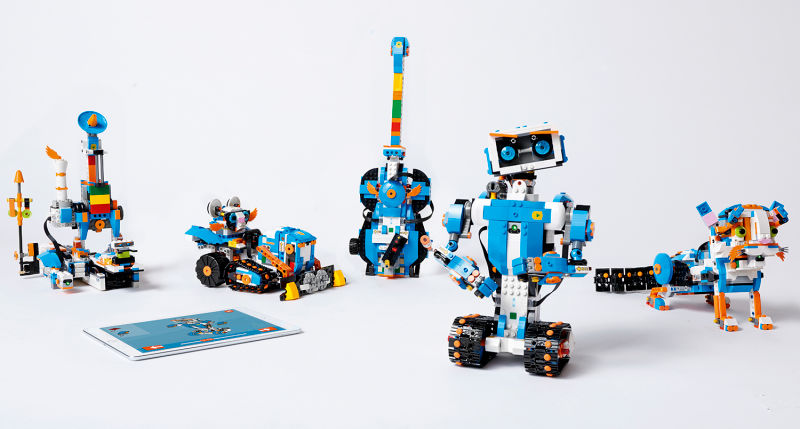 LEGO BOOST will be available at most stores and online shopping sites where toys are sold, through select consumer electronics retailers, and at LEGO Stores and shop.LEGO.com in the second half of 2017 and will have a suggested retail price of $159.99 USD, €159.99 (EUR) and $199.99 (CAD). For more information, visit www.LEGO.com/BOOST.

About the LEGO Group
The LEGO Group is a privately held, family-owned company with headquarters in Billund, Denmark, and main offices in Enfield, USA, London, UK., Shanghai, China, and Singapore. Founded in 1932 by Ole Kirk Kristiansen, and based on the iconic LEGO® brick, it is one of the world’s leading manufacturers of play materials. Guided by the company spirit: „Only the best is good enough“, the company is committed to the development of children and aims to inspire and develop the builders of tomorrow through creative play and learning. LEGO products are sold worldwide and can be virtually explored at www.LEGO.com.