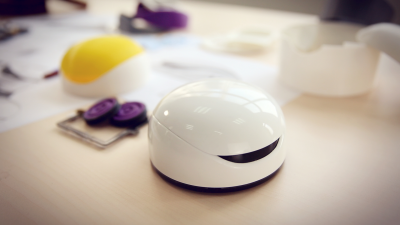 Combatting the trend of over-reliance on virtual games and screen time while transforming the robotic toy, DFRobot’s Vortex allows children to combine physical and virtual play. Children can interact with their toy robot while also programming and inventing their own commands and games, all via their smartphone or tablet.

Vortex has the following standout features:

“We’re transforming the household into part robotics lab, part playground,” said Ricky Ye, CEO, DFRobot. “We fully believe in the philosophy of learning through play. With our robot, which offers an immersive programming experience, children can learn to code while having genuine fun. Our mission is to bridge the gap between toys and education–particularly STEM education–as technology-driven skills are more important than ever.”

Vortex’s pre-programmed games are designed to be fun and intuitive. Bumping Fight serves as a pushing match between two players to force others from the arena, while Virtual Golf allows children to direct the robot towards a target, while controlling the power of their shots. In addition, Driving allows children to use their device as a remote control to drive their Vortex forward, backwards, right or left around a track, and with Robot Soccer, children can play a match with anywhere from 2-22 players.

DFRobot’s Vortex is suggested for children ages six and up. By supporting the Kickstarter campaign, backers can pre-order the Vortex robot two-pack for $119 with their contributions. Robots will ship to consumers in fall, 2015.

DFRobot is a robotics and open source hardware provider that is dedicated to creating innovative, user-friendly products that foster a strong community of learning. DFRobot collaborates with multiple tech giants including Intel and Microsoft and has a product catalog boasting over 1,000 components and widgets including sensors, robotic platforms, communication modules and 3D printers. DFRobot is one of the early evangelists of the Maker Movement and strongly supports greater access to the maker culture.

DFRobot’s new product, Vortex is an intelligent and responsive robot that will enable children to learn, play and program. Vortex will bring together robotics with digital games through fun and interactive apps that allow children to explore, program their own games and solve problems.